The fact that newsrooms and planning are not, as many claim, natural enemies was a point made by a number of the presenters at Editorial Days 16, but nobody made that point as forcefully as Dominic Ramel of Berner Zeitung (BZ).

That's because his job title - a rare one in publishing - is Planning Chief and his entire focus is on using planning to maximise resources and streamline processes.

Ramel works at BZ, part of Swiss publisher Tamedia which produces magazines, papers, and a growing portfolio of online platforms.

BZ itself has two local editions, 12 sections, 180 staff so it doesn't take much imagination to see the demand for planning.

“Convergence has made a journalist's life more complex”, he explains. “We have to serve online, including social media, as well as print, and all these channels work at different speeds.

Online basically works around the clock, but with complex stories requiring video and interactive graphics you need a longer preparation time and more teamwork. In our case our workflows have traditionally focussed on print so while we're gradually moving away from that it is still a fact of life.”

Multiple platforms working at different speeds is a problem for all publishers, but BZ believes the way to deal with it is increased planning. “My job is to promote inter-departmental working and support those department managers and bring a longer term outlook into planning – away from the previous short and medium term thinking.”

The day in deadlines; planning and publishing at BZ

The touchstone of planning for most publishing is the editorial conference and Ramel started there with the new approach. “For a start we modified the timings of meetings and basically moved everything up the schedule. So the first conference call asks 'what has changed for online since yesterday, and what are the most important elements for print?'

Layout and proofreading were moved to a time slot two hours earlier in the day. “We also introduced a new meeting at 4pm where we look at the paper for the day after tomorrow and plan what will go online. That's when we ask 'what needs to be online first? What should be held back?” 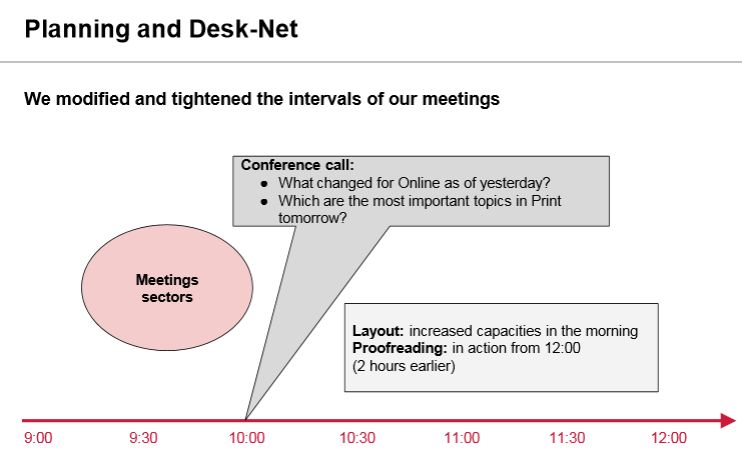 Deadline times changed too. “First we have timings set not story by story, and not by hour but instead in two waves. Editors write stories to be live between 12 noon and five, then there is a second wave of evening publishing between five and eleven at night.” 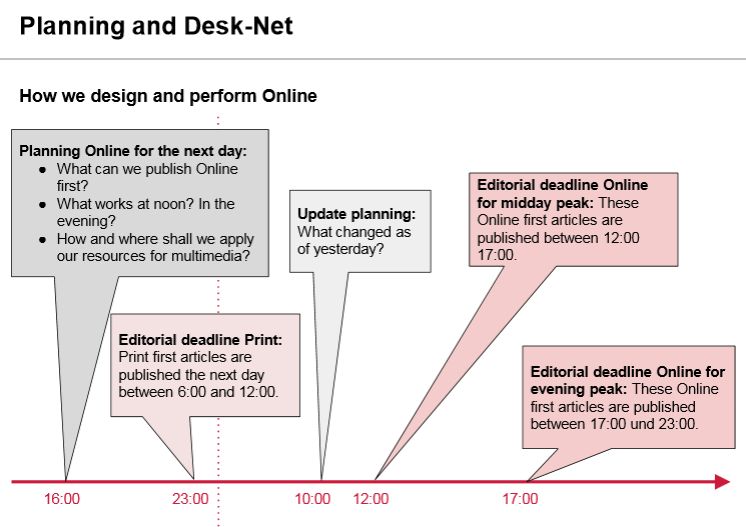 Ramel uses Desk-Net as the editorial calendar software that keeps track of this publishing flow, and uses it in meetings for on-the-fly editing.

“We edit Desk-Net live; the editor has a laptop with the screen projected for everyone to see and do live edits in meetings. At 11am we have the editorial deadline for print and articles we haven't published online are brought in.”

“We use the adjustable status symbols to make a list and the first task was to systematize the entries as different offices were using them differently. I tried to harmonize that and have consistent entries because consistency has to come from the top. What you see here is an example; green is for print, red is online, and a blue question mark is for a story that doesn't yet have a status – such as stories that have been proposed but not yet discussed." 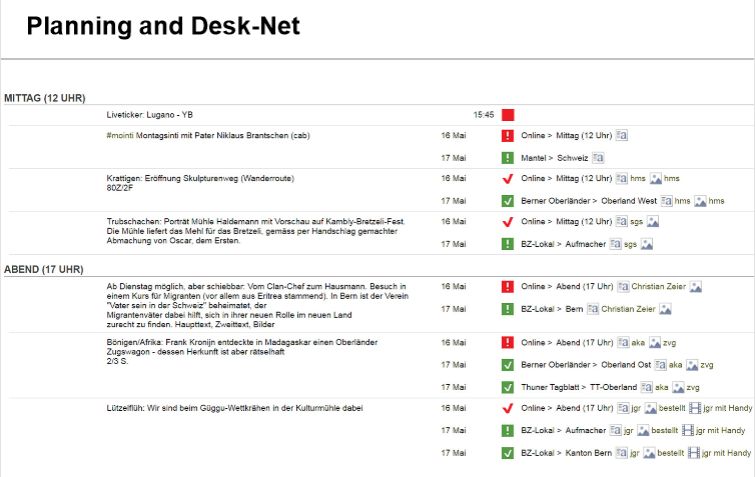 Using dedicated editorial calendar software makes a huge difference.  "Given that we used to use Excel spreadsheets that's a huge improvement; it's clearer, gives a good overview, and it truly multi-user - back when multiple editors worked on the same spreadsheet it would often block.

When other Editorial Days attendees asked Ramel if his new role as Head of Planning had gone down well with the staff he allowed himself a smile.

“My impression was that the news structure took it pretty well. It took some getting used to both for members of editorial and managers and we needed to breathe life into the new position. Increasingly what I see is that colleagues are happy with it as it means they have someone on site who knows what is happening and acts as an interface to planning. A lot of my job is opening doors and making people talk to one another.”

On a roll – Südwest Press and the pleasures, pi...