Samuli Leivonniemi is the Head of News Desk at Helsingin Sanomat, the largest daily newspaper and largest Desk-Net editorial calendar customer in Finland. He also likes a party; which is good, because recently both Samuli and Helsingin Sanomat have had some subscription success to celebrate.

The number of digital subscribers at Helsingin Sanomat is now 250,000 and while that may sound relatively modest compared to the big publishers of larger countries Samuli points out that 250,000 subscribers represent a full five percent of the Finnish population.

"Furthermore, not only had the subscriber base grown for the first time in 25 years, but that trend continued last year, it was not a blip. So how did we do it?"

As with so many success stories about loyalty, part of the answer to Samuli's question came from a long hard look at what wasn't working.

"We started with subscriptions for online content in 1996, but then changed that policy and went to free access with continuous updating in 2000. By 2003 everything that went into the daily print edition was also being published online. Then in 2012, we introduced a metered paywall with five articles per week for free. In 2016 we realized we had a problem."

That progression from attempted subscriptions in the early days to a free for all by the early 2000s, and then a metered paywall is a familiar pattern in the industry as initial enthusiasm for the medium came up against a growing need to show return on investment. Samuli realized that it wasn't working.

"Our subscribers were aging fast. Our subscriber base was aging on average by three years every two years, and while online, we had a younger audience they weren't paying. If the metered paywall wasn't working for the younger audience, we realized they would only pay for something if they couldn't get it for free."

"The good news was that thanks to Spotify and Netflix, there was evidence they were willing to pay for content if presented in the right way. So, we decided we had to create a reason to subscribe, a new strategy, and that strategy was the Diamond story."

"We chose to call them diamond stories. It sounds like something you want to read, right? The articles are hand-picked, unique, and often take a long time to form, just like real diamonds."

Diamond stories were the 'deep dive' investigative pieces and exclusive content kept behind a hard paywall costing 9 euros 90 per month.

We used a diamond symbol for the marketing to highlight them and offer a two-week trial period for each one bought."

A marketing logo and a hard paywall weren't enough to drive the subscriptions and Samuli, and his newsroom looked hard at the right content for the push.

"We are from a traditional quality newspaper background, so we put a lot of effort into things that matter like politics, economics, international news. Now some of that stuff can seem a bit boring, and the need to know factor in the digital era wasn't strong enough to power subscription growth."

"So, we decided to put more focus on well-being, on culture, and on popular science, because these subjects convert well, for us the young – by which we mean the under forty-fives."

Samuli's easygoing presenting style belies the cultural difficulty that underlay such a decision. It's never easy for a 'serious' news provider to change priorities about stories since such a choice implies a shift in the identity of the medium. The hunt for diamonds, however, required a more flexible outlook and planning with an editorial calendar tool. 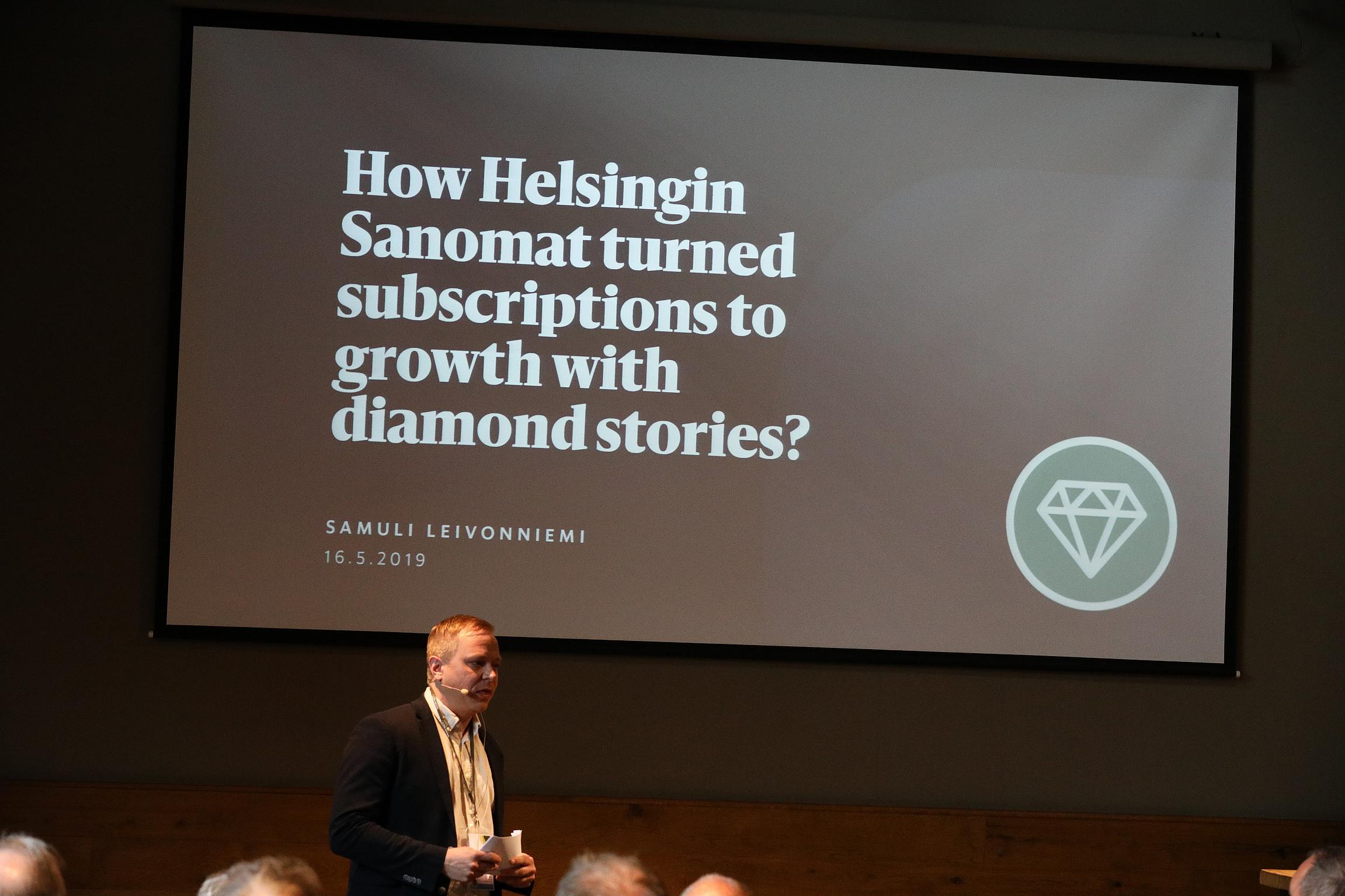 "The answer to that is the wow story. The wow is usually highly visual; for example, this story about the cars of the future and how they will impact on the traffic system is brought to life with video animation."

"Then there are the in-depth interviews, the people stories about personal lives that also cast a reflection on the bigger picture of society and the world. The best example I have is the Finnish politician talking about leaving her job and her role in parliament since her cancer diagnosis only gave her a couple of months to live.  If it provokes emotions, it's a Diamond story."

It's not all bad news, either for the subjects or for the news industry. "We also do a lot of stories advising on ways of living better. For some reason every story we write about digestion and stomach problems really sells."

Importantly Samuli makes it clear that this is not a race to the populist bottom either.

"While breaking news makes for bad Diamonds because you can find that news elsewhere for free, we found that if you do exclusive investigative work, then that's a good Diamond. For example, we wrote a story about Nepalese restaurants bringing people to Finland to work in conditions that are essentially trafficking. Quality reportage works if they are the stories you can't find elsewhere. If it's good, it sells."

Another reassuring aspect for traditional quality publishers is that individual voices still count.

We find that analysis and commentary from writers and correspondents works, and so we try to brand our best reporters."

Measuring success as a part of editorial planning

A move to new metrics also helped identify what worked and had value. In particular, there was a move away from the old metrics of clicks and page views.

"We now have a process of continuous learning from analytics, and we use 'sessions' as the metric as it's a better way of measuring loyalty than clicks. We found, amongst other things, that interactivity in stories increases the reading time by seventeen percent. Now measuring digital activity has become a common goal for editorial and commercial teams."

In terms of those teams, there were also some shifts in editorial planning. "A new role of Planning News Editor was created. It's important because we have 150 articles a day of which only five to ten will go behind the hard paywall as Diamonds. We have also changed the planning outlook from days to long term, sometimes to months, and we try to plan the main stories at least weeks ahead."

There will still be publishing traditionalists who insist that 'news' can't be planned that way, but the subscriptions growth and the diminishing importance of breaking news in that suggests otherwise. However, there is at least one thing that traditionalists and the Helsingin Sanomat can agree on; Samuli's conclusion.

"What you need are damn good stories. Quality sells." 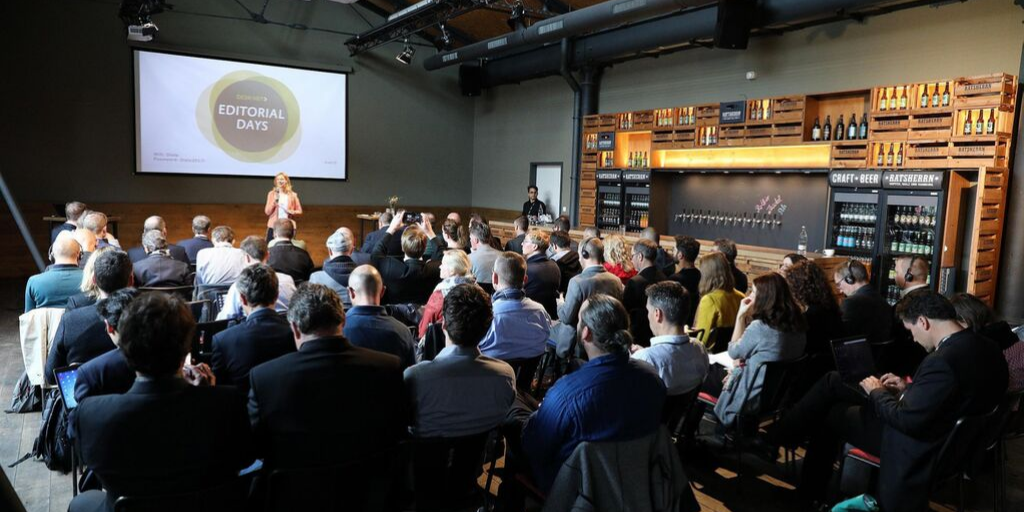 How the newsroom system can enable loyalty

Content planning is still the backbone of the news...